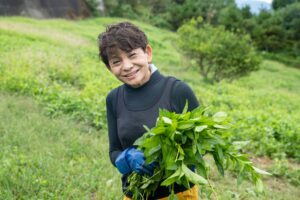 Mrs.Kyoko Tochitani (Tsurugi Town ／Keka Revitalization Project) This is Mrs. Kyoko Tochitani who is the representative of the Keka revitalization project and started Indigo cultivation. She wanted to produce "Edible Indigo" in Keka district of Tsurugi town where Indigo cultivation used to be actively carried out. Keka's Indigo is cultivated with traditional farming methods. The fields of Tadeai are covered with thatch and fallen leaves. No chemical fertilizers or pesticides are used. "Keka's Aifun (Edible Indigo Powder)" is made from dried and powdered indigo leaves grown with great care. Mrs. Tochitani produces and sells this product which is good for our bodies because she wants consumers to eat Indigo with […] 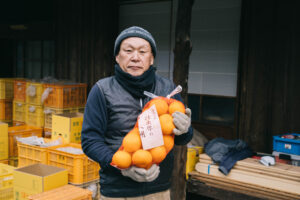 Mr.Shinichi Maeda (Mima City／Hassaku Orange Farm) Shidehara of Anabuki town in Mima city is located along the Anabuki River, which is said to be the clearest streams in Shikoku and is known as a production area of Hassaku orange. The 8 farmers of the "Shidehara Hassaku Orange Productive Cooperation" certified as Eco-Farmer ship approximately 50 tons of Hassaku orange per year. The Hassaku orange is grown by skilled farmers using reduced pesticides and organic fertilizers, and has been exported to Europe for the past six years. This is Mr. Shinichi Maeda who is the head of the Shidehara Hassaku Orange Productive Cooperation. Sericulture used to flourish in this area. Mr. […] 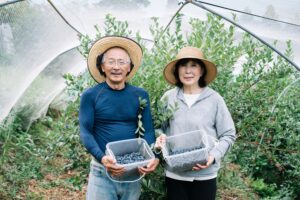 Mr.Yoshinobu Fujio, Mrs.Kinuyo Fujio (Wakimachi in Mima City) There is a field with 600 blueberry trees in a mountainous area at an altitude of 400 meters. Mr.Yoshinobu Fujio and his wife Mrs.Kinuyo run a blueberry farm in Nishi-Otani, Wakimachi, Mima city.Mr.Yoshinobu took early retirement from the company he worked for when he was 51 years old and started farming in 2006. The reason he started growing blueberries was to use them as an ingredient for his wife Mrs.Kinuyo's bread making.The first year, we planted about 80 blueberry trees. Each year, they added more and more trees, and now they grow 600 blueberry trees of 60 varieties without any pesticides. The […] 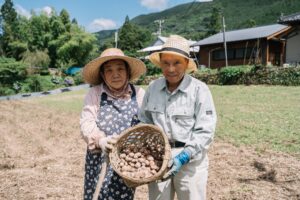 Mr.Fumihiro Okamoto・Mrs.Reiko Okamoto (Higashi-Iya in Miyoshi City／Farmer) Mr. and Mrs. Okamoto grow "Goushu potato" in Higashi-iya, Miyoshi city. It is a type of potato called "Goushu potato" that has been handed down from ancient times in the mountainous area around Mt.Tsurugisan. It is said to be originated from the Heike clan who were driven out of the capital and fell into the East-iya region in the old days. It is grown on sloping lands with good water repellency. Layers of thatch on the fields are effective in preventing frost and suppressing weeds to grow potatoes, and harvesting takes place from July to August.The potatoes are small in size and available […] 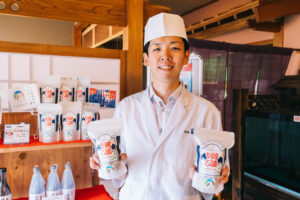 Mr.Shinya Fujimoto （Japanese Cuisine Ajisho Fujimoto） (Higashi-Miyoshi town ) Mr.Shinya Fujimoto who is the head chef of Japanese Cuisine Ajisho Fujimoto in Higashi-miyoshi town. He developed "A specialty of Nishi-Awa Awa-Okoshi" to promote the attractiveness of buckwheat rice which is a local ingredient. "A specialty of Nishi-Awa Awa-Okoshi" is made of buckwheat rice in puffed form and covered with brown sugar, syrup, or honey. You can enjoy the crunchy texture of the Okoshi. Mr. Fujimoto gained experience at a Japanese traditional restaurant in Osaka and a hotel in Kyoto. Product that takes full advantage of the taste and aroma of the ingredient is popular as a "new way to eat buckwheat rice.” […] 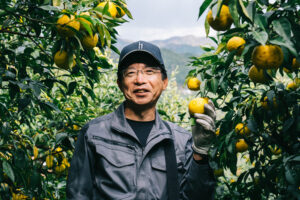 Mr.Hiroshi Nakamura（Nakamura Farm） (Yamashiro Town in Miyoshi City) Mr. Nakamura's Yuzu farm is located on the slope of the mountains in Ono, Yamashiro town, Miyoshi city. It is a special space that almost seems to reach for the clouds as if we were in the sky. This is the reason why Mr. Nakamura's Yuzu is called "Tokushima Yuzu in the Sky". Yuzu grows in an unobstructed environment with sufficient sunlight. The huge temperature difference between day and night and the well-drained sloping lands can produce highly fragrant and juicy Yuzu. Mr. Nakamura uses herbaceous cultivation to plant "Festuca myuros" for undergrowth instead of using herbicides or chemical fertilizers. When the […] 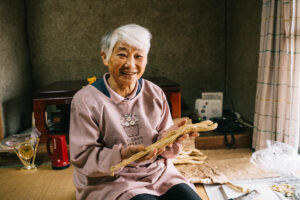 Mrs.Fumi Ichihara (Tsurugi Town) Radishes are dried and processed as preserved food during the cold winter season in the mountainous areas of Nishi-Awa. Mrs.Fumi Ichihara who lives in Nagase, Tsurugi town, peels radishes grown on a slope and hangs them under the eaves to dry for about a month in every December. Expose them to cool breezes and keep them out of the rain under the eaves to dry and increase their sweetness. Mrs.Ichihara uses a knife to thinly chop the dried radish, which is about one-tenth the thickness of the original. The radish is cut into round slices about 2mm in diameter and dried outside once again to complete […] 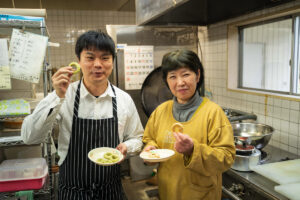 ―Mrs.Yoko Takeoka（Representative of Mikamon, a homemade confectionery factory)―（Higashi-Miyoshi Town） Mrs. Takeoka makes "Awanowakka Inoko cookies" that are modeled after the traditional "Inoko sweets" confectionery of the Nishi-Awa region. "Awanowakka" was created in cooperation with "Sora no Sato," which promotes attractive things in the western part of Tokushima prefecture. The moist "Inoko sweets" are rearranged into crispy cookies in a modern style under the supervision of chef Mr.Naoya Higuchi. There are four flavors: Hattaiko, green tea, strawberry, and cocoa. Ingredients are used for their products, which are certified as a Globally Important Agricultural Heritage Systems "Nishi-Awa Steep Slope Land Agriculture System." They are sold at " Roadside station Mikamo" and other […] 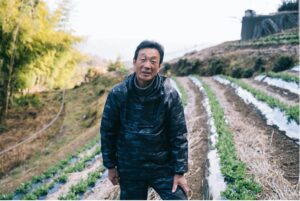 Mr.Itaru Sato (Ashiro in Higashi-Miyoshi Town) There was a village called Dodoro which was located in the mountains at an altitude of about 500 meters in the Ashiro district of Higashi-miyoshi town. About 50 years ago, there were 10 private homes in this area, but the place name "Dodoro" is no longer used because the number of houses has been decreased to two. Mr. Itaru Sato runs a farm in this village. Mr. Sato lives at the foot of the mountain now, but he grew up in this village. His 83-year-old mother, Mrs.Kayoko still lives alone in the family home, and Mr. Sato grows vegetables and minor grains in this […] 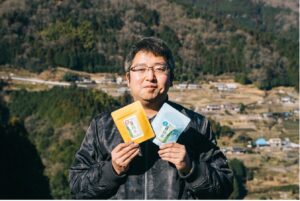 Mr.Hiroaki Kondo (Iuchi, Ikawa Town in Miyoshi City) Tea plantations on the mountain slopes are dotted throughout the Iuchi district of Ikawa town in Miyoshi city. Tea cultivation used to flourish on the steep mountain slopes in this area, however, there are fewer and fewer people who can manage their tea plantations because of population aging. Under such circumstances, Mr. Hiroaki Kondo of Kondo LLC began managing the tea plantations of elderly people who could no longer grow tea to revive local tea as a specialty product. Mr.Kondo and his father manage 8 tea farmlands from 5 retired farmers in total, including his own tea farm near his house and […] 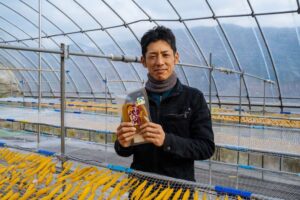 Mr.Keiichiro Yamashita (Ikeda Town in Miyoshi City) The Koyatoko district is located in Nishiyama, Ikeda town, Miyoshi city which is a small village in the mountains above JR Tsubojiri station known as an unexplored station. Mr.Keiichiro Yamashita decided to quit the company he had been working for and take over his family's farming business in 2020. Mr.Yamashita's family grows mainly fruit tomatoes and sweet potatoes. They harvest tomatoes from summer to fall, and in winter they use the sweet potatoes harvested in fall to make dried sweet potatoes. Tomato plastic greenhouses are covered with finely chopped Kaya as a fertilizer. The harvested tomatoes are shipped to local products markets and […]